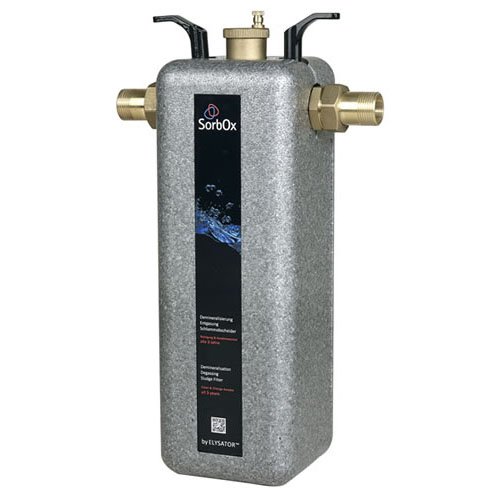 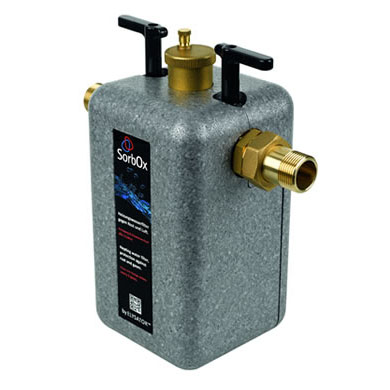 Do you have questions about our products? We are available by email or telephone.
Or get in touch with us.

In the past, the majority of underfloor heating were installed with plastic tubes, which are not impermeable to oxygen. Meanwhile, it is fortunately easily possible to produce heating pipes for floor heating systems and to obstruct the diffusion function on nearly tight. Indeed, the best heating system also disposes of enough elements, which cannot call this quality their own. This is valid not only for valves, screw connections, circulating pumps, but also for control units, automatic breathers and defective expansion vessels. At these places, it also comes in very modern heating systems to an unintentional oxygen admission. This oxygen, a too deep pH factor, but also a raised conductivity of the filling water are typical triggers for damages of heating installations.

Counteract corrosion from the beginning

Also damaging for sensitive devices such as heating baths is the penetration of the filling water with salts. Therefore, it comes to corrosion of the lines within the heating system. Electrochemical reactions have a harmful effect on the metallic parts of the system and accelerate the wear process. Benefiting from a high amount of salts the formation of galvanic elements is promoted that ultimately cause this corrosion. It also contained in the unfiltered water, chlorides, sulphates and nitrates have their not insignificant proportion.

It is true that, at simple softened water, calcium and magnesium ions exchanged for sodium ions, thus removed from the water hardness, and significantly lowered the hardness grades, but the salinity of the water remains unchanged. In case of modern systems, an important damage factor remains completely unchanged.

Earlier it was especially set for inhibiting corrosion on chemical types of corrosion protection. In many cases, however, it was found that especially in hard to reach places on glands, but also in already by rust and dirt damaged places no more active protective effect could be obtained and the real problems were solved so only dissatisfactory. Made even more difficult to perform such protection method proves the need for constant monitoring. This is not only time-consuming but also costly. The attempt to split the heating system into two parts (heating circuit and kettle circle) by using heating exchangers, only leads to two separate problem areas in the long run, but not to sustainable solution to the problem. In addition, modern heating systems are significantly more prone to silting, blockage of control valves and pumps and precipitation by lime and other water constituents. The consequences range from quick corrosion breakthroughs in the boiler, flow noises by gas developments, increased energy consumption to serious water damage.

To prevent debris clogging the heating circuits and favoring pitting, mud must be filtered out of the heating system regularly. Commercially available mud collectors operate with flow filters according to a based on the principle of gravity. Here, however, only coarser particles are detected. But in SorbOx a new type of magnetic flux filter is used. This means not only it is filtered in a conventional manner, but additionally with two very strong permanent magnets. These have the advantage that almost all corrosion particles have magnetic properties.

Due to its positioning, the blowdown can be done at any time and without interrupting the heating. For the blow down withdraw the magnet so the particles are released and can be removed easily through a washout of the device.

An excellent approach, not only for new but also for existing heating systems, provides the Eylsator. With it, a reaction vessel with high-purity magnesium anodes is in the heating system easily installed through a bypass or shunt. The side product of this reaction is magnesium hydroxide. By this the increase in pH is favored and is raised in the optimal range.

By these reactions decreases not only the electric conductivity but also the hardness of the water depending on the exact composition of the heating water. The heating water is finally only a low-salt, alkaline liquid with an extremely minimal oxygen concentration. The probability of corrosion in a system with such heating water is extremely unlikely. The Elysator unit insert easily into SorbOx SI or LI.

In cold heating water dissolve gases, which are released after reheating. Especially in high heating seasons this process is repeated many times during a month. Thereby, small gas bubbles develop. A similar process can be observed every day in their own mineral glass. What we perceive as pleasant tingling during drinking, proves far less positive for a heating system. What we perceive as pleasant tingling turns out for a heating installation by far less positive.

In such the heating water cools in the radiators and heating circles. Then here it also "breathes" these gases one around them later in the boiler again "to exhale". However, the bubbles are carried along in each circulation process in the heating water. The heating characteristics of the water are thereby significantly reduced and the power consumption increases. Conventional ventilators can remove larger gas deposits, but the variety of bubbles remains completely untouched.

To remove these bubbles, it requires a special filter. The fine micro bubbles are retained by these and grouped into larger gas deposits that eventually can be vented. Only the larger gas depots have enough buoyancy to independently can penetrate in the high altitude areas of a heating system in which they can be removed. Due to the large amount of microbubbles created not only a significantly increased energy consumption, but also flow noise in the heating system, which can be quickly perceived as disturbing.

The Elysator makes itself however in this step the solution temperature difference in the everyday process of circulation on its own and uses this as a pump to remove air and gas. Thanks to special filters, all gas and air pockets can be removed at any time. There’s no use of external energy needed. The filter cartridges are on top made of stainless steel and almost wear-free.

4. The Purotap system to demineralize your heating system

The SorbOx LI can be equipped additionally with the proven Purotap demineralization cartridge. The cartridge can if necessary be simply inserted into the SorbOX LI and be removed just as easy. All Purotap solutions are based on latest requirements and quality standards. Including the Association of German Engineers (VDI) standard norm 2035, which states: “With decreasing water salinity increasing amounts of oxygen can be tolerated. In the absence of ions that can take over the transport of electric current in the water, is the formation of galvanic cells, which may lead to localized corrosion, virtually impossible. (…) For initial filling larger water heating installations using demineralized water is recommended.” However, the DIN 50930 of the German Institute for Standardization e. V. (DIN) paid full attention in developing the Purotap systems. According to this chloride and sulfate ions stimulate the anodic partial reaction of metal dissolution. By selective anion exchange the probability of local corrosion can be reduced.

Another fulfilled standard are the provisions of the Swiss Association of Heating and Air engineers (SKWI). The Swiss standard requires: “The filling and make-up water must be desalinated.” On top of that are the SKWI states that "the best technical solution is demineralization in waters with high chloride or sulfate content".